The humble eggplant takes center stage when it comes to Sicilian cooking. Eggplant Caponata, a Sicilian eggplant recipe, has a flavorful blend of sweet and sour flavors all in one dish. And it’s even tastier served the next day! 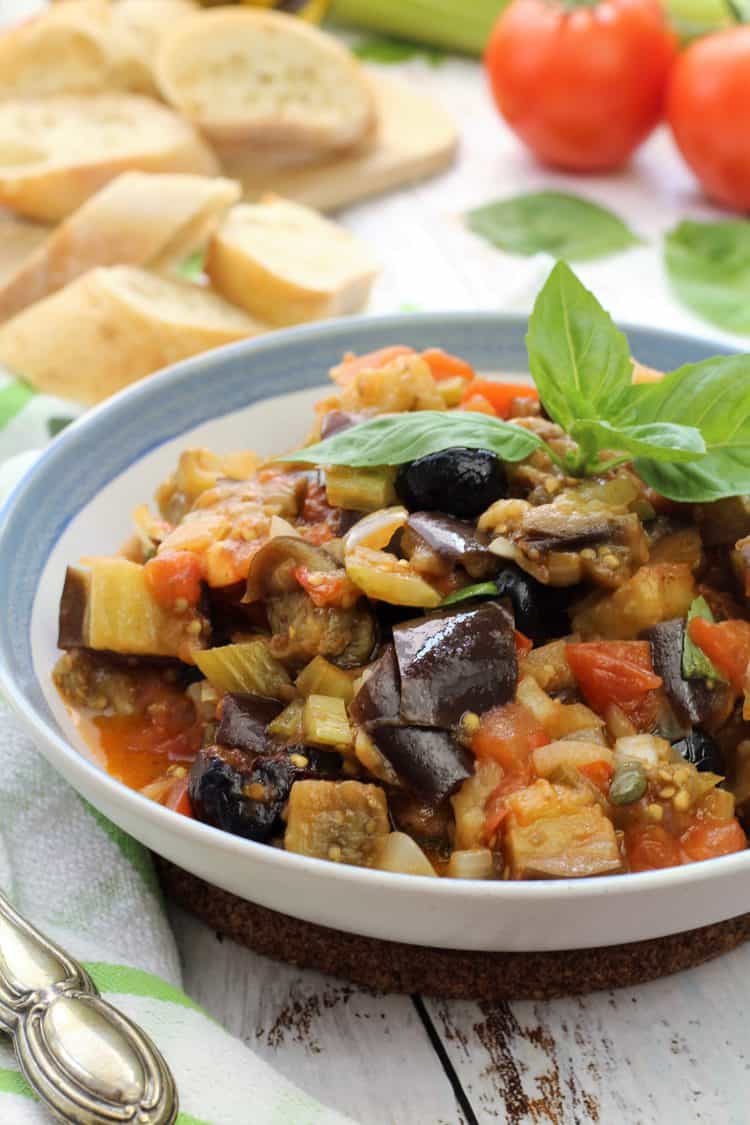 When you think of Sicilian cooking, one of the first ingredients that comes to mind is the iconic eggplant. During a recent trip to Sicily, the number of dishes featuring eggplant I sampled was mind-boggling. The record was five dishes during one meal! 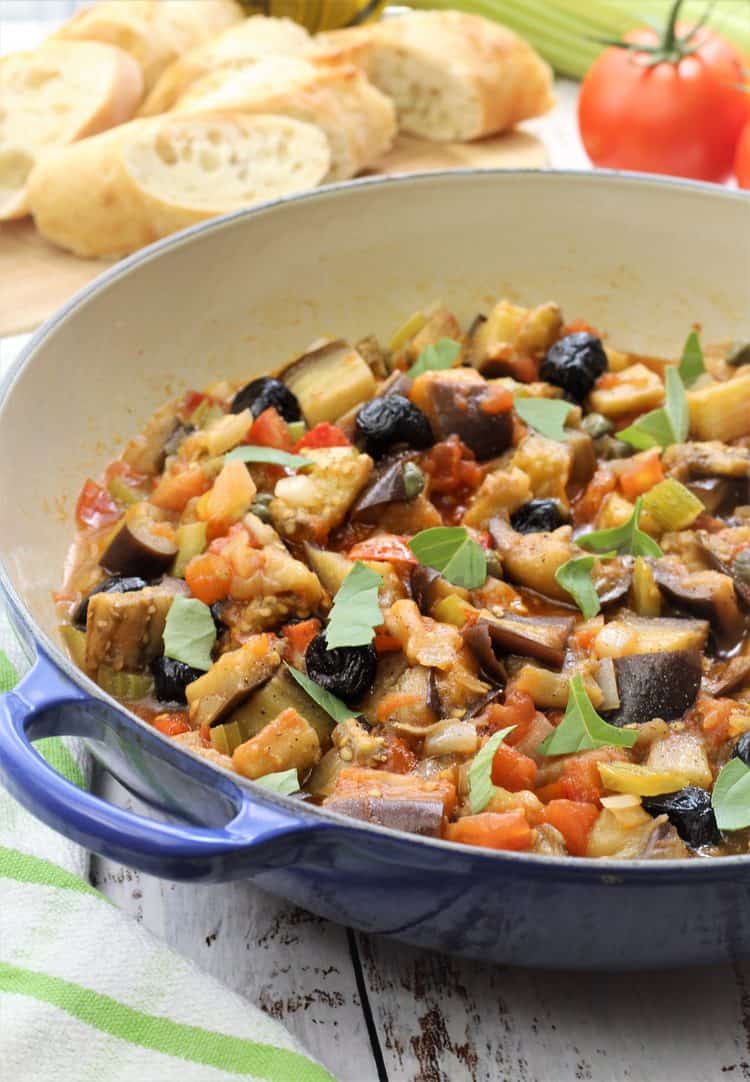 And then, of course, there is Eggplant Caponata. The sweet and sour Sicilian eggplant recipe that is infamous all over this island! This blend of eggplant, onion, celery, tomatoes, olives and capers has a unique flavor due to the addition of sugar and red wine vinegar that take this dish to a whole new level.

I used this beauty from my garden to make my caponata. This variety of Italian eggplant is perfect for making caponata and after years of trying, I finally had some luck growing them in my garden! But of course, you may use the common globe eggplant found in most grocery stores. 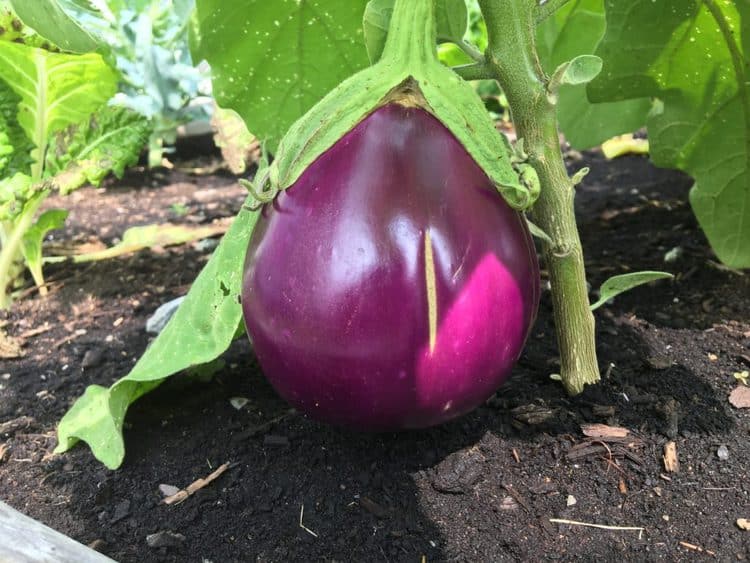 Since they were plentiful in my garden, I chose to add fresh tomatoes, but in a pinch you can also use canned diced tomatoes.

Also, caponata is usually made with green olives. However, I brought back a batch of my favorite black olives cured by my lovely cousin in Sicily. I decided I needed to incorporate them in my caponata.  It was just as delicious! 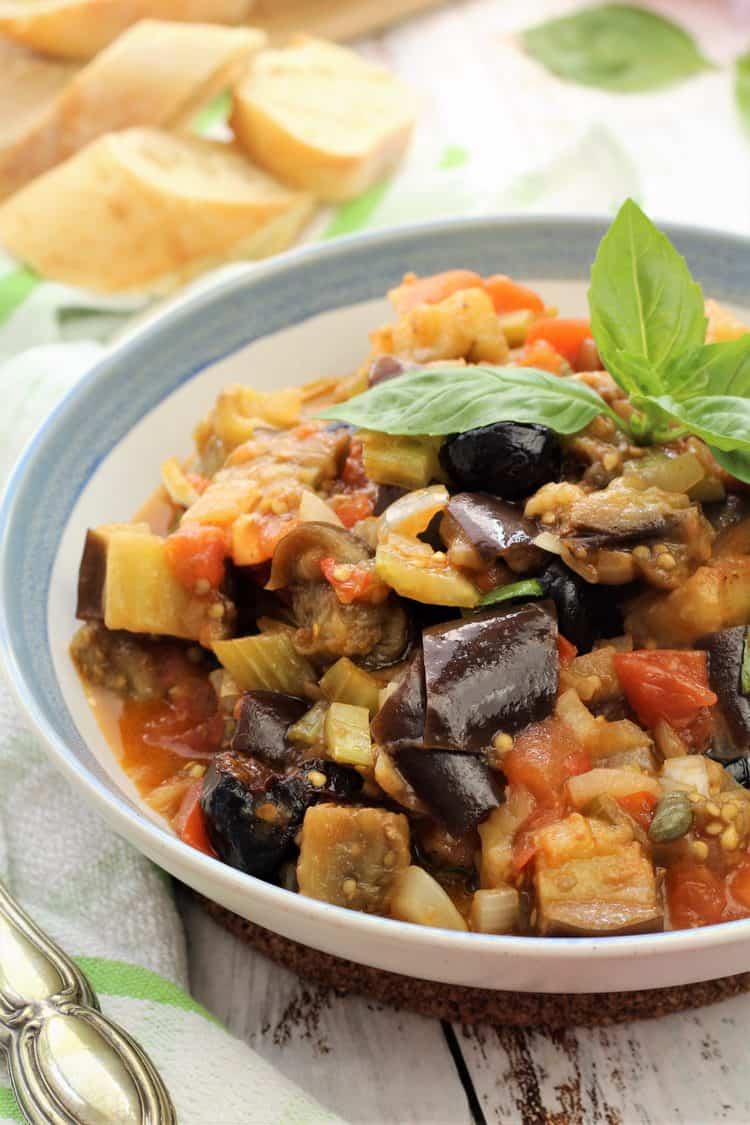 The eggplant for caponata is traditionally fried, but given my aversion to frying unless absolutely necessary, I chose to oven roast it. I apologize in advance to all the purists who prefer frying their eggplant!

Place cubed eggplant on two parchment paper lined baking sheets. Be sure to generously coat your eggplant with olive oil in order to prevent it from drying out. Roast in a 400 degrees F preheated oven for 30 minutes. 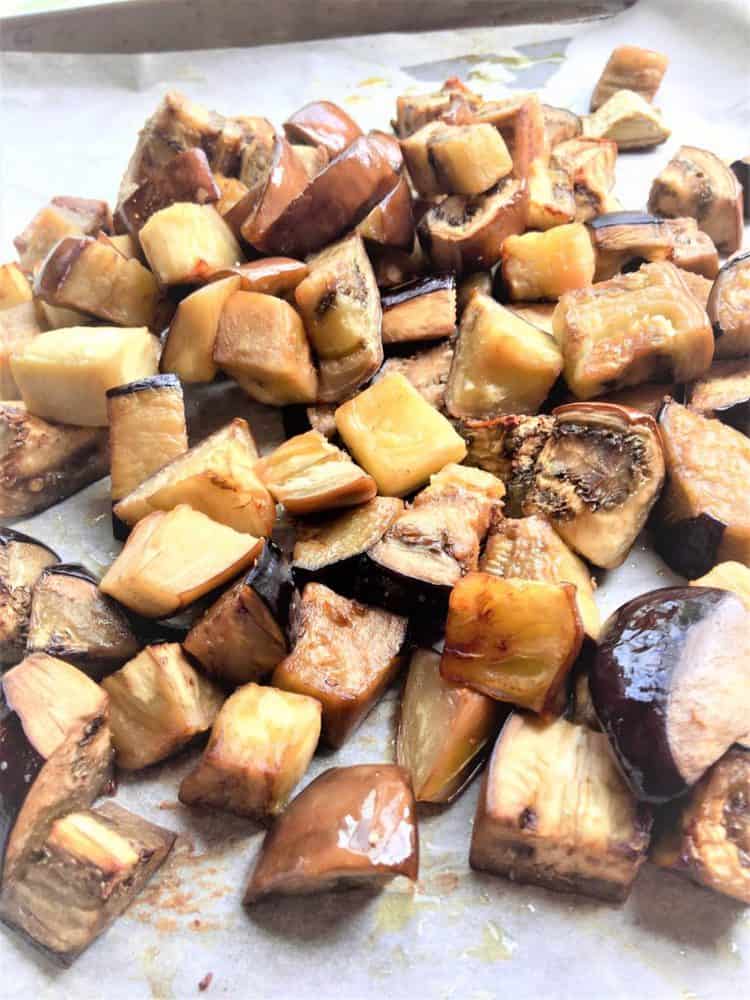 While the eggplant is roasting, in a large skillet heat olive oil and sauté a diced onion for 3 minutes. Stir in chopped celery, a pinch of salt and cover. Cook on low heat for 5 minutes until the celery is slightly softened. 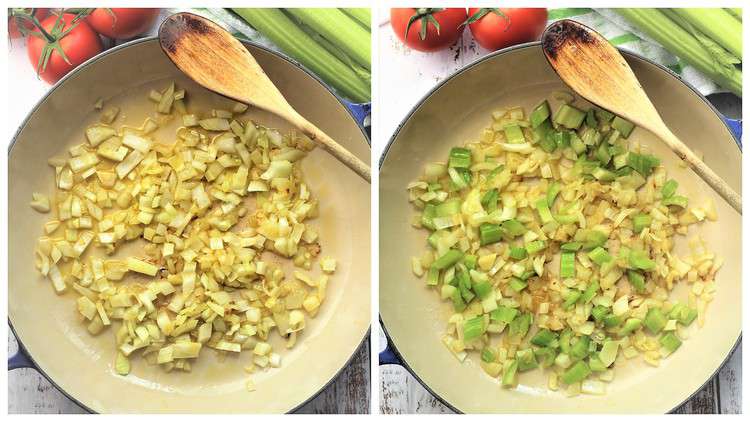 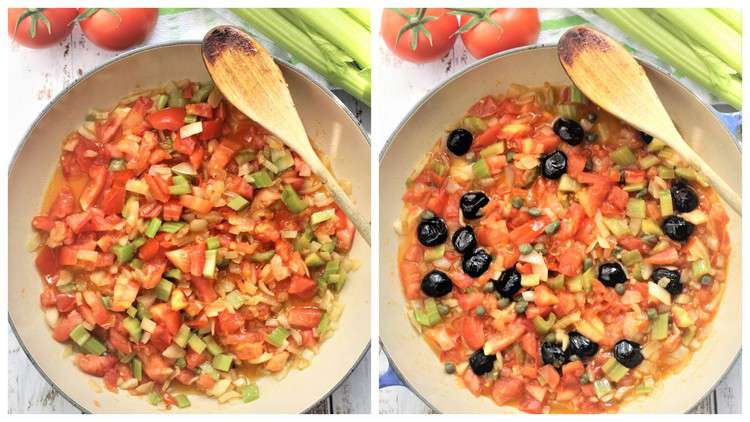 Toss in the roasted eggplant and stir to coat. Cook for 5 more minutes. Adjust seasoning ,if needed. 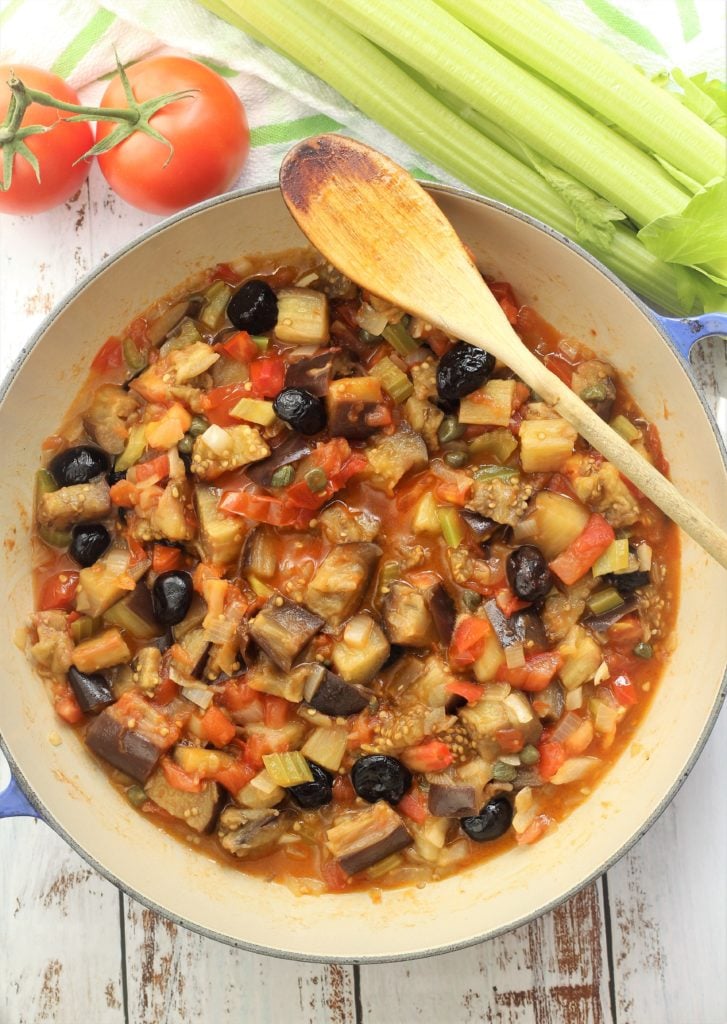 Stir in fresh basil leaves at the end of cooking. 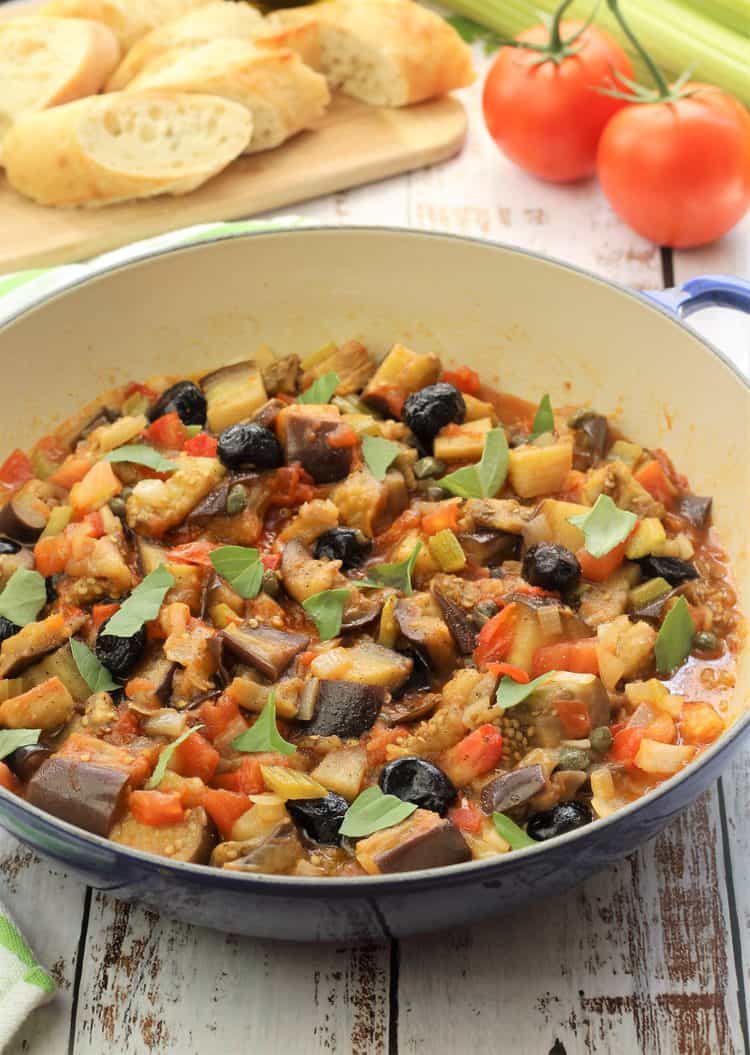 Another wonderful thing about caponata is that it tastes better at room temperature or even the following day.

I enjoy Eggplant Caponata as a side dish but it is hearty enough to enjoy as a main dish alongside some fresh, crusty Italian bread.

Keep leftovers refrigerated for up to 3 days. Let it come to room temperature before serving. 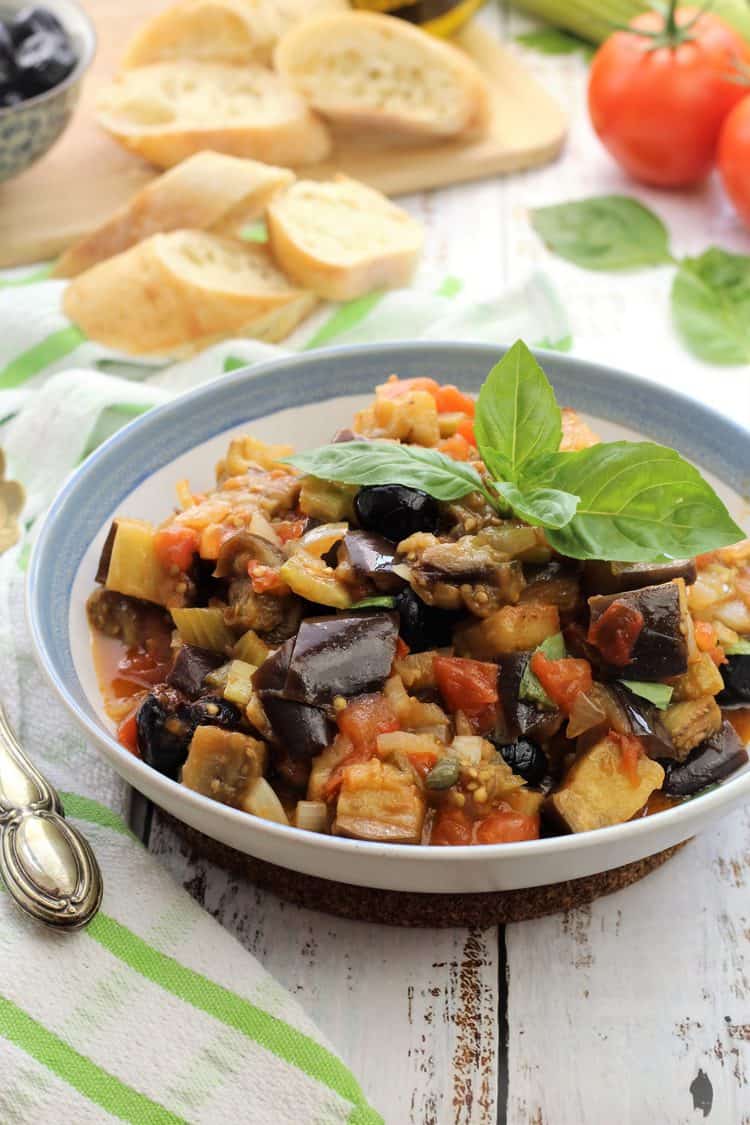 If you try out this recipe for Eggplant Caponata, please let me know how much you enjoyed it by rating it in the recipe card below.  Feel free to Pin it for later. Buon appetito!

And in case you were wondering, yes, I do have tons of eggplant recipes here on my blog!

Some are classics which I have enjoyed all my life as prepared by my mother such as eggplant parmigiana made with a Sicilian twist including mortadella and hard boiled eggs; Sicilian pasta al forno; baked eggplant and potatoes with tomato sauce; crispy baked eggplant cutlets; or pickled eggplant.

Then there are new Sicilian eggplant recipes that I had the fortune to sample during my travels and have recreated in order to share the recipes with you such as eggplant involtini with maccaruna; or grilled eggplant involtini. Check them out when you have a minute!

Another wonderful thing about caponata is that it tastes better at room temperature or even the following day. This is a dish that gets better with time, so you can definitely keep it in the fridge for a few days. Let it come to room temperature before serving. I enjoy Eggplant Caponata as a side dish but it is hearty enough to enjoy as a main dish alongside some fresh, crusty Italian bread. Please note that the nutritional information provided is approximate and may vary according to exact ingredients used and portion size.