Sfincione Siciliano is a Sicilian style pizza unlike any other you’ve tried before.  Topped with crispy bread crumbs, grated cheese and oregano for a satisfying crunch with every bite! Let’s talk about Sfincione Siciliano or sfinciuni as it is referred to in the Sicilian dialect. Have you ever heard of it? Neither have I until recently.

You might say it looks just like pizza. In fact I refer to it as Sicilian style pizza but I know some Sicilians may not agree with that.

Sfincione Siciliano has a thicker crust (just like a focaccia) and is traditionally baked in rectangular shaped pans.

The sfincione dough is usually covered with anchovies fillets. However, you’ll notice that I did not include any in my step by step images. This is due to a strong dislike of anchovies in my home!

The anchovies (if using) are covered with a fragrant tomato sauce with onion and oregano.  The sauce is topped with either shredded aged caciocavallo cheese or grated Pecorino Romano cheese as well as a crispy, lightly toasted breadcrumbs.

This is definitely not your average layer of thick cheese topped pizza! 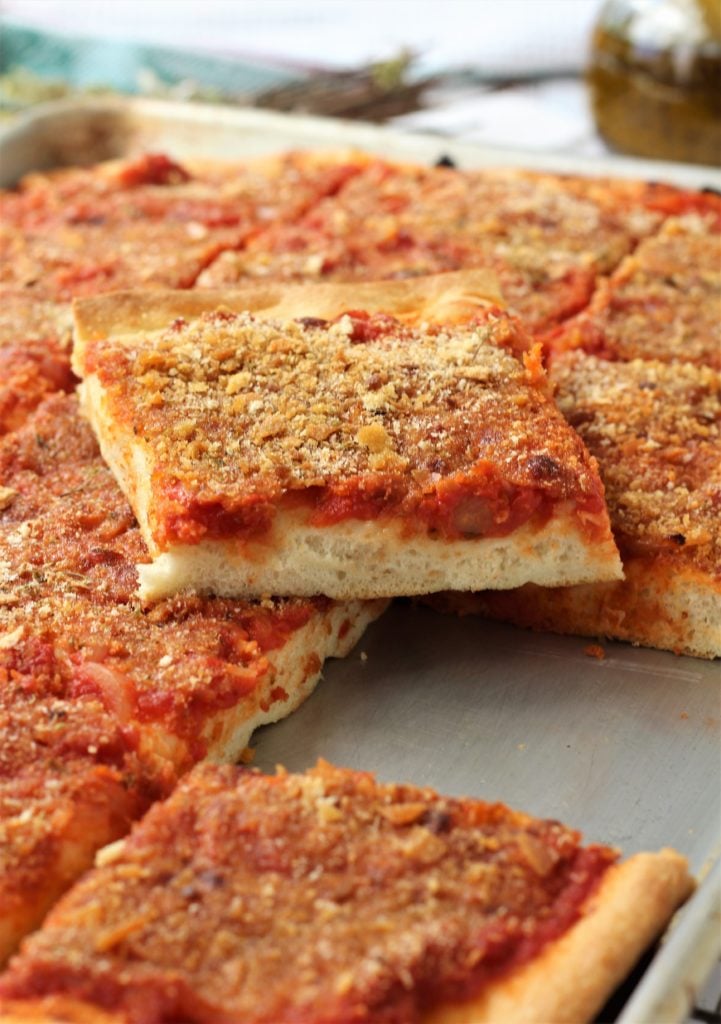 I realize that I’ve been eating some form of sfincione since I was born. Raised in Montreal, I’m used to the thick crusted rectangular tomato covered pizza that is common in all Italian bakeries. I think perhaps this pizza evolved from sfincione?

In the case with sfincione, the crisp breadcrumb coating absorbs some of the tomato sauce thus preventing it from becoming greasy and overly saucy. You know the kind I’m talking about! Proof the yeast: Place active dry yeast in a bowl. Warm water until lukewarm and pour over the yeast. Let sit for 10 minutes until foamy.

With a stand mixer: add flour and salt to the bowl of your stand mixer fitted with a dough hook and combine. With the mixer running on low speed. Pour in the yeast mixture. Switch to medium speed and knead for 10 minutes until the dough is smooth and elastic.

By hand: Combine flour and salt in a bowl. Once the yeast is ready, stir in sugar and olive oil. Make a well in the center of the flour and pour in the yeast. Use a wooden spoon to stir together until a raggedy dough is formed. Turn the dough onto a lightly floured surface and knead until smooth and elastic, about 10 minutes. 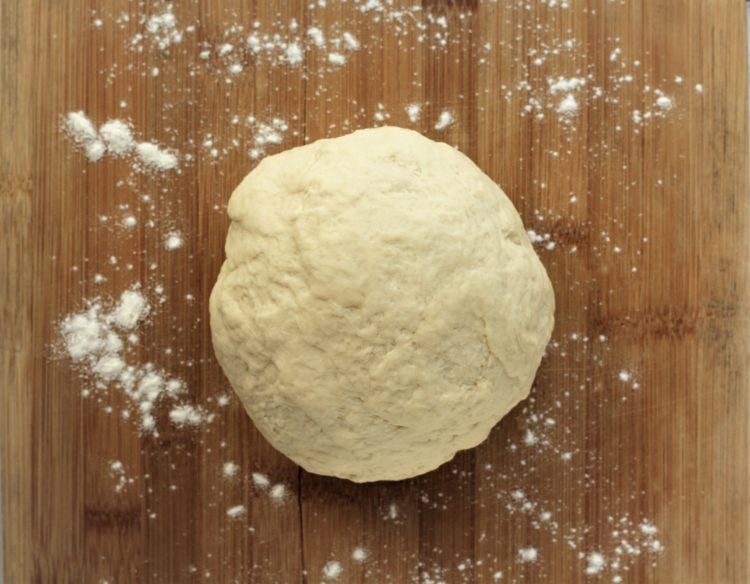 Let the dough rise: Transfer the dough to a lightly greased bowl, cover and let rise for 2 hours. 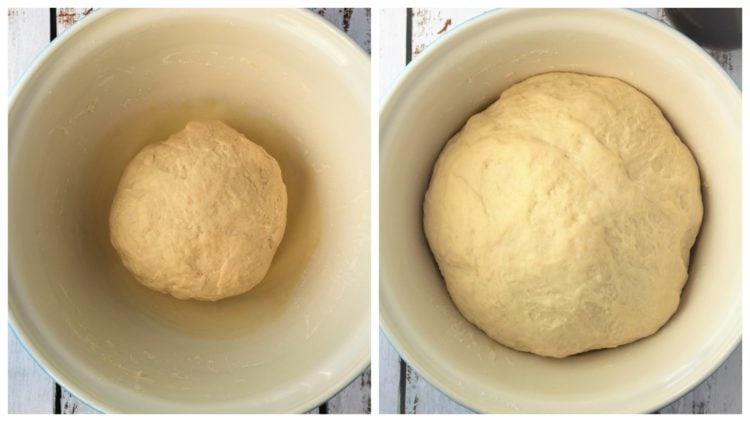 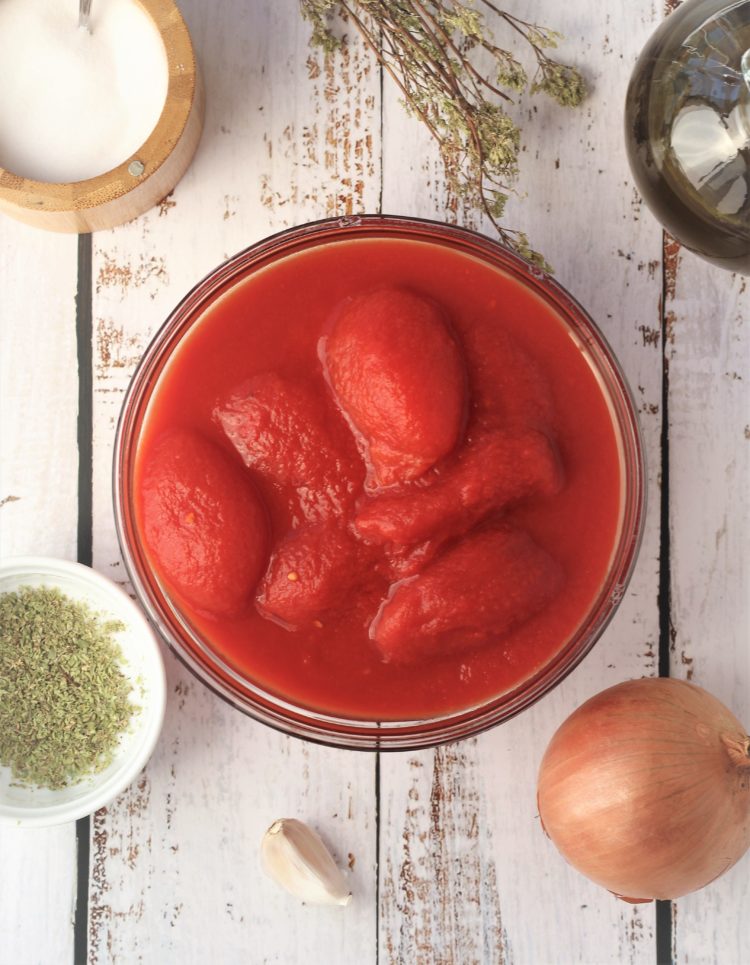 In a large skillet, sauté a thinly sliced onion in olive oil until golden, about 5 minutes.  Add the garlic and cook for one minute longer. 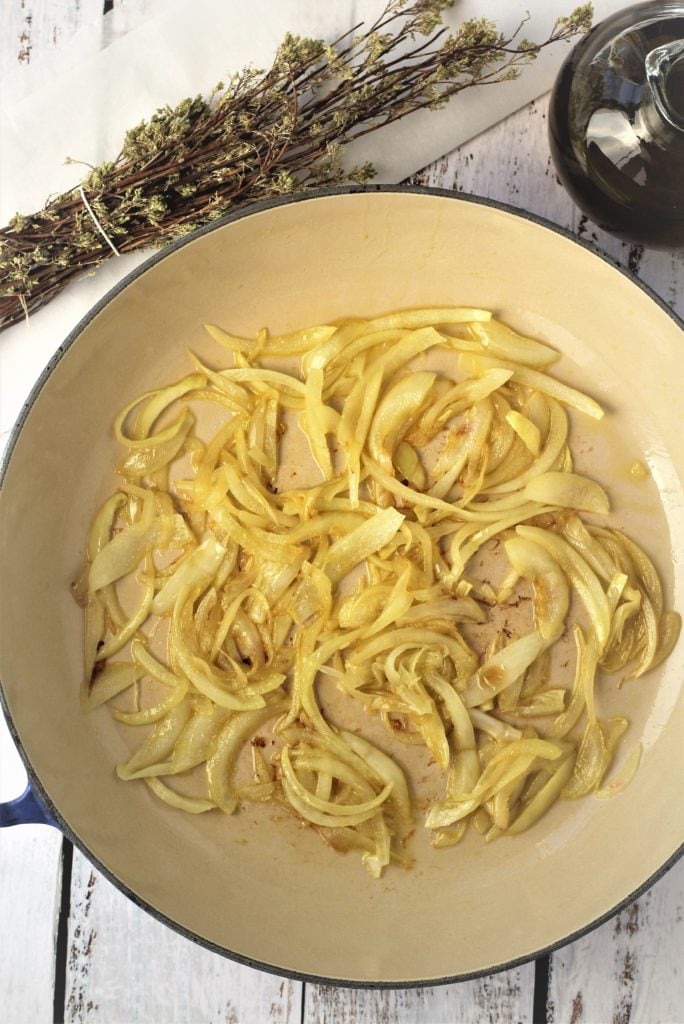 Pour in 1 can of whole plum tomatoes which you have crushed by hand. Or add to the skillet and use the back of a wooden spoon to break down the tomatoes. Add oregano and salt, to taste. Bring to a simmer and cook for 30 minutes, stirring occasionally. 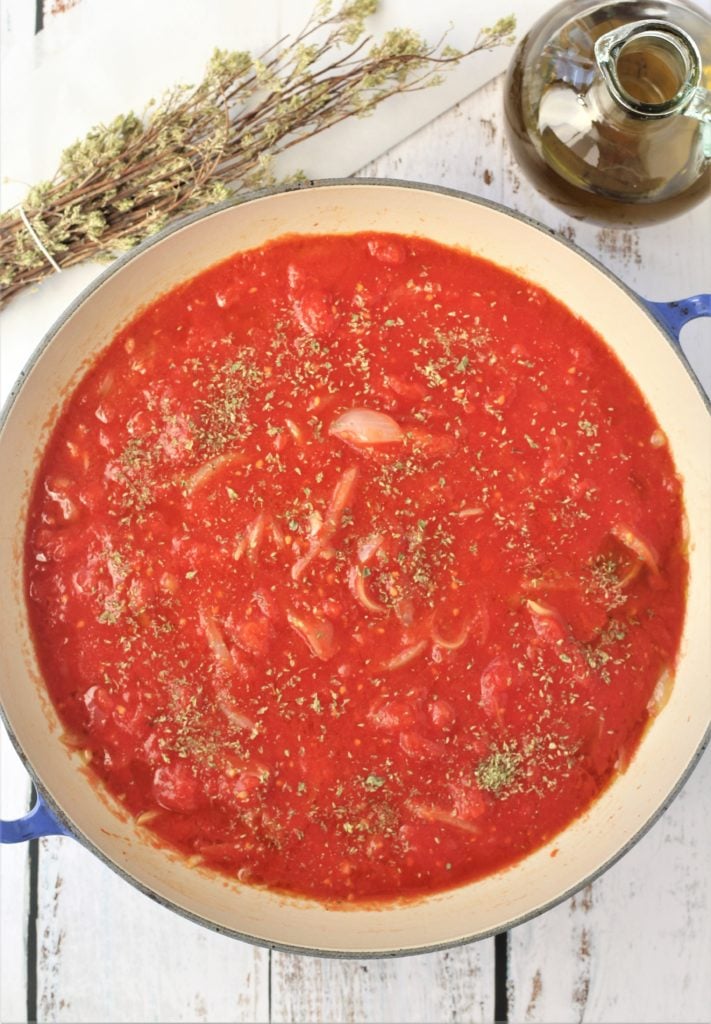 In a dry skillet toast unseasoned breadcrumbs on medium high heat until lightly browned, about 2-3 minutes. Transfer to a bowl and aside.

Assemble the sfincione:  Generously grease a 10 X 16 inch baking sheet with olive oil.  Punch down the dough, transfer to the prepared pan and use your finger tips to spread out the dough to cover the pan. Cover with a clean tea towel and let rest for 30 minutes. 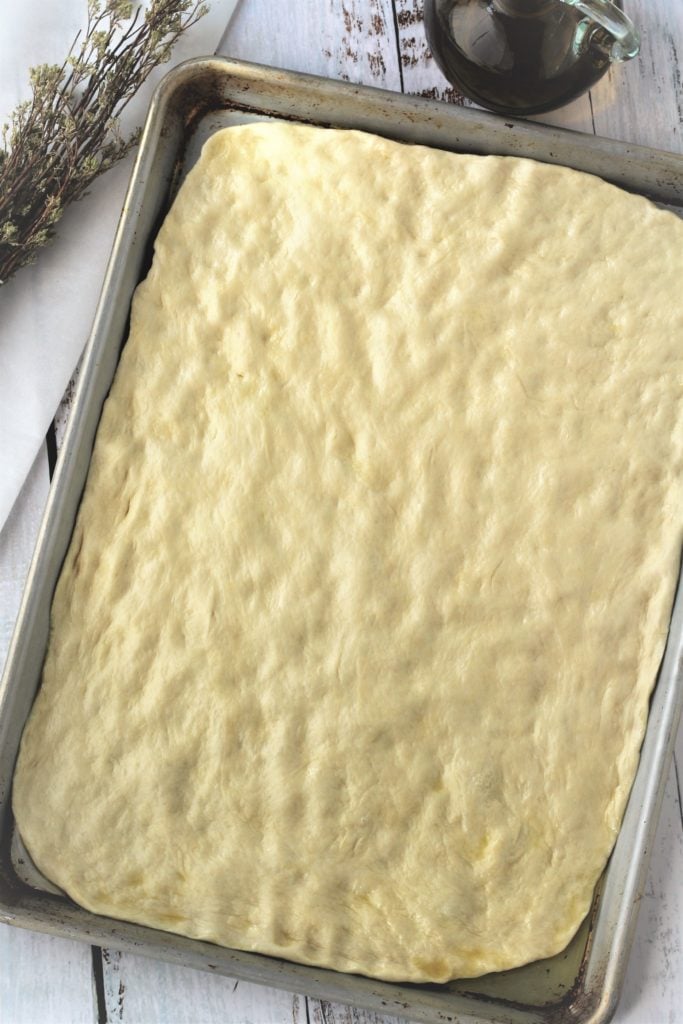 Preheat oven to 425 degrees F. Cover the dough with the prepared tomato sauce. Sprinkle the sauce with grated Pecorino Romano cheese. Top with the toasted breadcrumbs and dry oregano. Drizzle the surface lightly with olive oil.

Bake for 25 minutes until golden underneath and the breadcrumbs on top are crisp. 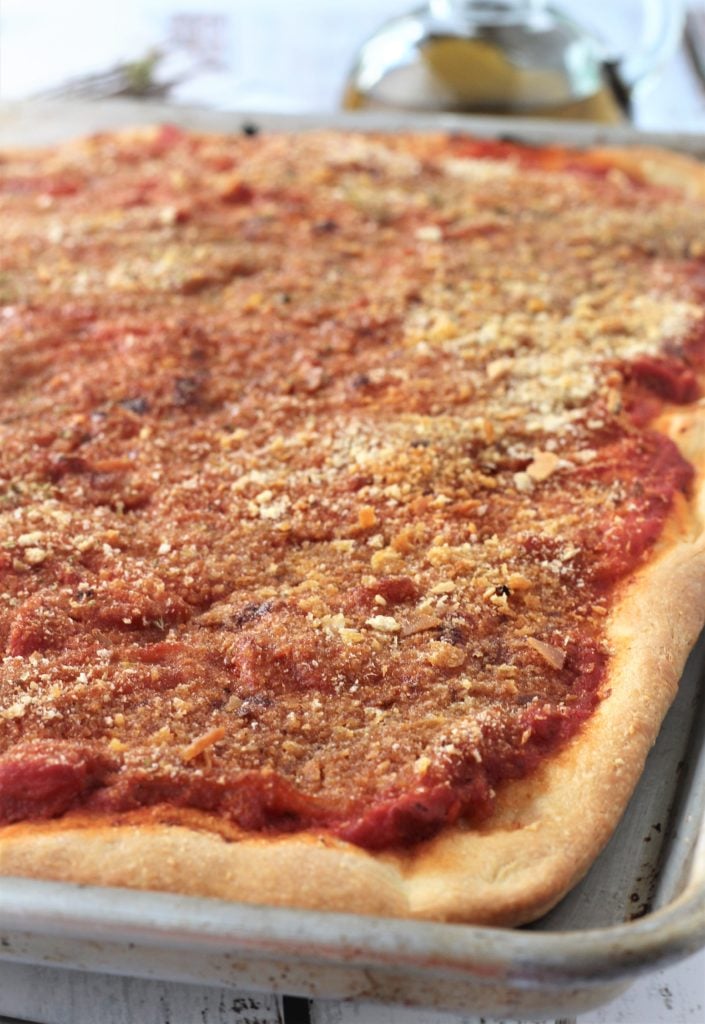 Cut into squares and serve hot or at room temperature. 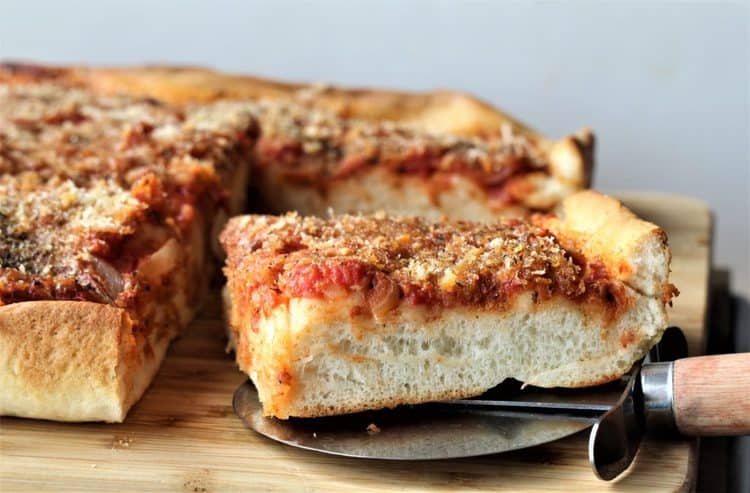 If you try out this recipe, please let me know how much you enjoyed it by rating it in the recipe card below. Don’t forget to pin the recipe for later!  Buon appetito! Check out more recipes made with pizza dough!

To assemble and bake